Fixing an electronic appliance would seem, for most, a very scary task. How could one find a problem within all those colorful wires and tiny parts? Well, this is indeed not very simple, and there’s a reason technicians study for years to do this job, and are often good only after several more years of gaining experience. However, there are a few minor repairs that even the layman might perform by himself, and save a lot of money.

One very common problem with a lot of electronics in recent years is exploded or burst capacitors. This happens because most makers opt for cheaper capacitors. These capacitors tend to be unable to handle the load and they burst, which can sometimes even be heard as a small “pop”. In some cases a device could work for years without a hitch, but sometimes an entire production series could quit working very shortly en-mass. For example, the OptiPlex GX270 and GX280 series desktop computers by Dell, that went on sale around 2004 and onwards suffered this problem, which forced Dell to recall all the motherboards and cost the company 300 Million dollars.

This sort of problem happens with many other electronics, and can often be fixed with little experience. The symptoms could be anything, from weird crashes to a completely dead device (the Dell computers just gave some weird error on the screen and shut themselves down). If you have a problematic device, you would need to take it apart, which could be tricky in itself. While doing so, be sure to mark the cables clearly, so you know where and in what order to put them back in. Then, look for exploded capacitors. They aren’t really exploded – there won’t be any charred remains or severed human fingers with blood, but an exploded capacitor will often bulge out a little – usually by a millimeter or so. Here’s a picture of one: 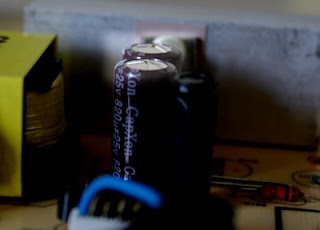 If you’ve found one, you might try to replace it. This can be done in a few minutes, and In many cases, will make the problem go away.

1) The first step is identifying the faulty capacitor. Capacitors have 3 characteristics:
a. Voltage, measured in Volts
b. Capacitance, measures in Farads
c. Form – Axial or Radial.

In most household appliances, the capacitors will be quite small, measuring at around 10-40 Volts, and several hundred Micro-Farads (printed us µF). A Radial capacitor has both its connectors at the bottom, while an Axial one has the connectors protruding from its ends – like a skewer. For most repairs, you could use any capacitor, as they have long-enough leads that will allow you to bend them into a shape that will fit the board.

2) The 2nd step is getting the right capacitor – It’s not always easy to find the correct capacitance and voltage, but it’s OK and even recommended to get ones that are of higher value than the original. For example, an original 680 UF/25V capacitor can be safely replaced with a 1000 UF/35V. Don’t go too wild, though, and be sure that the new capacitor you buy fits inside the case, physically. You can typically find capacitors at Radio Shack, Fry’s or online, although the Shack have only a very limited selection.
3) The 3rd step is to remove the damaged capacitor/s. 1st, note the polarity of the current capacitor, indicated as a colored line along its axis, or a + and – signs at the poles. To remove the capacitor, turn on your soldering iron and heat up the contacts on the reverse side of the board and use a solder vacuum or soldering mesh to clean up as much of the solder you can. If you’re lucky, you will then be able to pull the old one straight out. If you’re less lucky, you might have to pry it out slowly, while applying heat to the contacts. Be careful, as the capacitor might heat up and burn your fingers. Sometimes there might be glue on or around the capacitors, and that gets in the way, so try to remove it gently without ripping anything out. Something that is very help is “helping hand”, which is a heavy metallic stand with clips to hold the board in place while you work on it. Some models even have a built in magnifier.
4) Once the old one is out, clean up the contacts with a soldering vacuum to expose the holes in the board, and insert the new capacitor into position. Heat the contacts and apply some solder, taking care not to use too much so it won’t leak onto other areas of the board. Be careful not to wiggle the capacitor while soldering, to prevent “cold” solders or fractures in the solder. Don’t forget to cut-clean the extra wire that remains of the capacitors contacts. 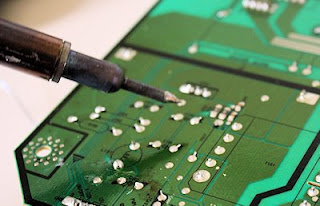 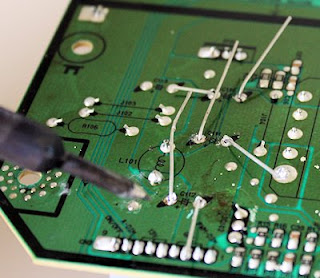 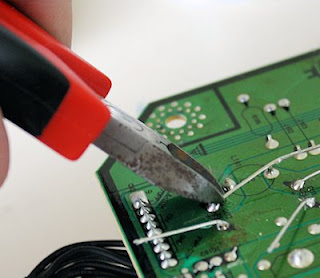 5) Once done, put back the device together and test it – be sure that when you connect it to the wall jack, don’t touch any exposed metallic surfaces. If you’re lucky and the problem was indeed caused by the faulty capacitor and it alone, the device will go back to life right away. Keep in mind that the new capacitor you’ve put in might also burn out one day, and the procedure might have to be repeated. To make things safe, better buy a good capacitor, and don’t settle for the cheapest kind – usually, even the best capacitor won’t cost more than a dollar or two, although you might need more than one to repair a device. 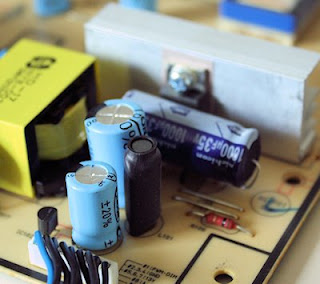