This year, I decided it’s finally time to see the San Diego Comic-con…the largest comics, sci-fi and fantasy convention in the world. For many years I’ve yearned for it, and wasn’t able to go for various reasons (mostly since I didn’t live in America), but this time, things aligned just right…or so I thought.

After my wife and I worked out the terms of my parole, I bought some plane tickets and found a nice hotel that was reasonably priced (the Bristol at $164 a night), signed up for membership as guided by the Comic-Con website and waited for ticket sales to be announced. However, as I learned the hard way, the demand for comic con tickets far outweighs the supply and every single ticket sold-out within less than 2 minutes. It was generally reported that they sold out in 96 minutes, but in reality that’s just the time it took to complete the financial transactions with the 100,000+ buyers. If you tried to go on the sale page after 9:02 that morning, you got a site-full page and that was it.

I was at a place with a bad internet connection, and by the time I was able to login, it was too late. Naturally, I was heartbroken. Not only did I miss my one-and-only chance to go, I was also stuck with a $300 plane ticket and $900 hotel, both non-refundable. However, there are other things to do in San Diego, so I decided to go anyway…very smart move, as it turned out.

At San Diego, I did the various attractions (I highly recommend the USS Midway and the Seal tour) and on Thursday (the 2nd day of Comic Con), I decided to go to the convention center and check it out. I wouldn’t be able to get in, of course, but I figured I’d at least see some nice-looking geek girls. I was right about the 2nd…but not so about the 1st. As it turned out, starting around 4pm, many people lined up the streets and offered their badges for sale. After some haggling, I scored one for $20 and spend the rest of the day at the convention. The next day (Friday), I went on CraigsList San Diego even earlier and scored a Friday Badge for $30 (it was earlier in the day, so worth more). The seller was at Comic Con himself, so we met at the entrance to the hallway and he sold me his spare badge. So, not only did I successfully GO to comic-con, but I also scored the badges for under their original price (which was $40). In addition, I got the badges without standing in any lines, while official ticket holders took many hours to convert the online registration to a physical badge. I’ve been told people lined up as early as 5 am for that, while those who showed up at opening times waited in line until almost noon just to get in.

You might be wondering how is this possible? As is well-known, Comic-Con takes various measures to prevent ticket-scalping! Well, this is true, and a ticket buyer can receive a badge only by showing an ID matching the name she or he used to purchase the ticket. The badge itself also has the person’s name printed on it. However, once that process is complete and you have a badge, the ushers who guard the hallways can’t really verify the identity of each and every entrant, and so anyone wearing a badge can walk right in without further scrutiny. Naturally, buying a ticket from a scalper ahead of the convention is a risk, because without an ID card matching the name, you’ll be denied a badge, so the trick is to get the badge itself…and that can only be done during the convention.

I’m not going to say that anyone should go ahead and just fly over without buying a ticket, of course. There’s always a risk of not being able to find a used badge, or that Comic Con will figure out some way to screen everyone (as a security expert, I don’t think that’s feasible, but who knows…maybe they’ll develop retinal scanner a-la Minority Report…). Also, a down-side of this method is that used badges are easy to find only around mid-day and later, so the ROI (return on investment) is limited. However, this is an important lesson for anyone who wants to go and can’t deal with the messy ticket sales system.

Here are a few more tips:

• Scalpers sell at inflated prices, and its not unusual to see a single day ticket offered at $250 or more. I don’t think it’s worth it when you can score a ½ day badge for $20-30 as I did. Your call, of course.

• Even though it violates policy, there are no active steps against reselling tickets – at least none that I’ve seen. Scalpers and resellers stand around road-blocks near the convention center, typically holding out their badge with their hand to indicate they are offering to sell.

• Selling your badge violates the terms and conditioned you sign when you buy the badge, so if you do it, you’re taking on some risk. Buying one, though, whether Comic-Con likes it or not, is not illegal and since you didn’t “agree” or “sign” anything, you are not risking any more than having the badge confiscated and yourself escorted out (which is very unlikely, as I said). I’m not a lawyer, so I can’t guarantee the above, but I’m fairly certain that buyers are in no legal jeopardy.

• Before 4pm, it’s hard to find sellers on the street, but CraigsList should have plenty. Naturally, the earlier in the day, the more the badge is worth, so take that into account.

• You probably don’t have what it takes to identify a forged badge, if you run into one. I can’t teach you how, I’m afraid, but it’s probably not going to be a problem, because the ushers don’t have the training and time to verify badges. They just glance at them quickly, because every usher has to handle about 5-6 entrants every second, and there are no “quiet times”.

• On the same note as above, I doubt the ushers would be able to recognize or detain people who are ineligible (for example, carrying a badge from the day before, or even without a badge at all) under all the volume. I wouldn’t encourage it, given how easy it is to get a badge if you really want one, but if all else fails and you have nothing to lose…might be worth the risk.

And finally, if you’re worried about my actions violating ethics or hurting comic con…well, I don’t feel bad about it at all. My badge was original and authentic, and if anything, the re-sale I was part in is better, because the thousands of dollars I spent at Comic-Con and in San Diego are an income for the vendors, income for the airlines, the city of San Diego and a boon for the US Economy. While Comic-Con failed to earn their $40 from my ticket, they are, in fact, a well-greased money printer. They charge an average of $22 per square foot of booth space, and the convention center has about 600,000 of those. Even with a 30% margin for walkways and volume discounts, we are still talking about millions of dollars (not to mention the tons of advertising and cross-promotions). I would certainly hope that Comic Con will find a way to allow everyone to attend, but until then, they’ll have to deal with the results.

If you have an HP laptop such as my EliteBook 8570w, you might have run into this issue when trying to hook up external monitors to the computer. The laptop has its own LCD display, as well as an external VGA connector and a DisplayPort plug. If you hook it up to an HP Docking Station such as the HSTNN-I10X (a.k.a. HP Advanced Docking Station Port Replicator) it looks like you can connect even more, as the docking station has a VGA port, 2 DVI ports and 2 DisplayPort ports). If, however, you try to pull this off, the HP does detect all the screens but will spit out “The display settings could not be saved. Please try a different combination of display settings": 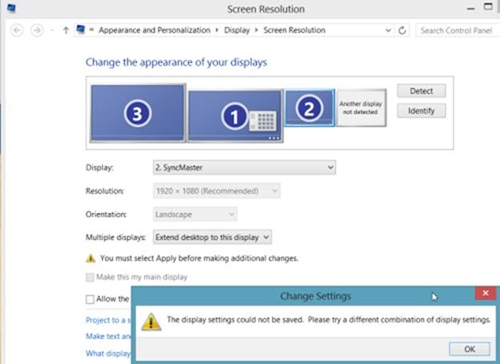 This makes it sound like some kind of driver or firmware problem, but don’t run off installing software, because it won’t help. The cause of this issue isn’t in the software, but due to the way the docking station is designed. You see, even though the docking station has 2 DVI ports and a VGA port, it can’t put a picture out to all of them at the same time. You can output to VGA+DVI or DVI+DVI…but that means turning off the laptop’s own LCD display (in other words…two screens together and no more).
If one or more of your monitors is new and has a built-in DispayPort input, then you can hook it up to the Docking Station’s DisplayPort, and then you can use 3 monitors (the built-in LCD, one DisplayPort monitor and one DVI/VGA monitor). Using the DisplayPort output, you can even hook up 4 screens (the HP’s LCD, two DisplayPort monitors and one VGA).
“But the HP laptop comes with a DisplayPort to DVI adapter”, you say? True, but HP were just too cheap to bundle a decent one. DisplayPort is very close to DVI and HDMI, technically, but it’s not quite the same. The adapter that comes with the computer is a “passive” one, which means you cannot use it for this purpose. The adapter you need should be “active”, and you can find plenty of them on Amazon, starting at about $15. For example, this adapter by Cirago is for a VGA screen:
http://www.amazon.com/Cirago-DisplayPort-Active-Adapter-DPA1011/dp/B005AT2LI0/
This one is for DVI (a little more expensive):
http://www.amazon.com/Cirago-DisplayPort-Active-Adapter-DPA1021/dp/B005AT2L58/
So, HP were able to shave off $5 off the cost of your $2000 computer and prevent you from using a 3rd screen, and to make it worse, make their documentation virtually impossible to understand this simple fact. I’m not sure who’s responsible for the meaningless message about the settings that cannot be saved, but that sure doesn’t make me feel better. At least now we know what to do…either get DisplayPort capable monitors, or the active adapter!
Posted by Erez Ben Ari at 10:08 AM 48 comments: